BYOT in the Gifted Classroom: A Perfect Fit

Posted by BYOT Network in BYOT Strategies on May 2, 2013

A Note from Tim: Forsyth County Schools in Georgia is in its fifth year of implementing Bring Your Own Technology (BYOT).  The first year was spent on developing the infrastructure, and the last four years have focused on piloting the initiative, developing personal and professional capacity, and eventually spreading the practice of encouraging students to learn with their personal technology tools throughout the district.  In this post, teacher of the gifted, Abby Keyser, shares her experiences with using BYOT to teach gifted students.

We are making a WHAT?  With WHOM?  These are the questions I was asked by my students after I explained our new project called the River Xchange.  I registered my students to participate in creating a wiki with a high tech pen pal class in New Mexico.  What was I thinking?  I had never made a website, let alone used Wikispaces.  Yet, here I was facilitating this project with my fifth graders, praying it wouldn’t turn out to be a disaster.  The key word is facilitate – to make easier or help bring about.  This word does not entail planning or leading through every step.  It simply involves guidance along the way; nudging back towards the path, but not fearing a branch in a different direction that could lead to the same destination. 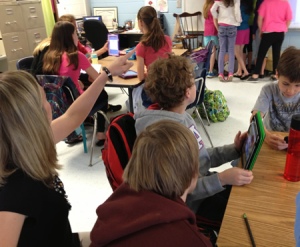 I took a deep breath and gave them the web address to the Wikispaces wiki.  I gave them some freedom to try out the site while I monitored.  They navigated with ease, figured out how to use all of the tools and even learned editing from an Apple device.  This all occurred within about 20 minutes.  All while I was imagining the hours I would have spent trying to make sure I knew how each tool worked and how to teach it to the kids.  Pretty soon, my entire unit revolved around the Wiki.  The students were in charge of their own learning.  I would enter a few HOT (Higher Order Thinking) questions each week with related sites to use for research and they were off!  I started to see improvements in the voice of their writing.  Jaded, disengaged students started jumping on laptops to see how their pen pals had responded to their writing from the previous week.  A few girls who were interested in photography created a photo gallery to share pictures of our local watershed with our new pals in New Mexico.  Next, they were asking if they could upload crossword puzzles and Zondle quizzes to test their pen pals’ knowledge of our local watershed.  My classroom was alive with excitement created by making connections to the world beyond our school walls.

Projects like the River Xchange give gifted students a chance to expand their audience.  So many of my students are passionate about current events or issues bigger than what’s being served in the lunchroom.  School newspapers are a great idea, but if you really want to engage the hearts and minds of our gifted population, you are going to have to give them a larger audience.  Try asking them to create a persuasive argument on their opinion of American soldiers in Afghanistan.  Half of them will lean their heads on their desks and whine, while others will drudge through the task.  Then try telling them that they could video their argument to post on Edmodo for their classmates and parents to view.  A glimmer of interest shines out in a few.  Better yet, tell the students they can post their argument on Teacher Tube and email the link to a few choice state and federal politicians.  Now you have everyone in the room furiously trying to get their notes down on paper, so they can film .  They want to get their point across to someone out there.  They want their voice to be heard.  Oral presentations to a class of 25 or 30 just aren’t enough anymore.  Empower them; give them global access.

Teaching Gifted at a Title I school has its pros and cons.  On one hand, you have access to many federally funded BYOT devices.  On the other hand, you generally don’t see a high gifted population at a Title I school.  Is it because the abilities just aren’t there?  Or is it due to a lack of exposure to environments and experiences that higher socio-economic populations generally have?  I believe the latter.  This is where BYOT devices are going to swing the pendulum.  Imagine teaching a child how to use a device appropriately to access information from places all over the world.  That would give him/her a whole new world to explore, tapping into the abilities already in place and expanding the child’s schema.  In the past, a gifted mind might have been stifled and unidentified in this environment.  Now we are able to compensate for a lack of exposure and expose their potential through the use of BYOT devices.

What We’ve Been Waiting For

In education, we hear a lot about student choice.  The gifted students in my classroom all but demand it.  Not only do they want to choose the format in which they prove their learning, but now they want to give input on what apps, programs, or online resources we use to address a new concept or topic.  They are essentially writing my lesson plans for me!   By allowing the students to have a choice in how they will receive information and how they can show their mastery, we not only give them ownership of their academic success, but we also propel them into being able to make good choices in their future careers.  My first step in planning a new unit is, now, to meet with the kids for an exploration session.  We use BYOT devices to research our topic and pinpoint the aspects they are most interested in studying.  The students then find apps that may aid in our learning.  We always end with a discussion of how they would like to present their knowledge gained and who they would like the audience to be.  Without BYOT, this would most likely be limited to boring PowerPoint presentations to the class, or worse, tri-fold posters!

Finally, here is a story of an overexcitable child.  Like many gifted minds, Michael just couldn’t sit still and never seemed to be focused on what I was saying in class.  He was constantly fidgeting in his bookbag with something, folding origami, solving his Rubik’s cube or throwing karate kicks across the back of my room.  No matter how many times I asked him to sit down and pay attention to what I was saying, he was always getting off task.  I found myself wondering how I could harness his mind’s bouncy nature.  He seemed to always be doing five things at once.  That was it!  I needed to teach him how to effectively multitask.  This is where BYOT has saved my sanity and reigned in my kids whom I could never seem to engage.  I started by getting Michael to use Join.Me on my whiteboard during any direct instruction.  This enabled him to not only view what was happening on the board through his device, but he could frequently type in his thoughts or questions in the back channel discussion log.  This gave his mind something to engage in actively while still focusing on the topic at hand.  Now, Michael is always the first to request that I add the use of Socrative to our persuasive debates, as a discussion question board to review what we learned in the last class, or as a backchannel to blog while we watch a video.  Multitasking may be something that we do out of necessity as teachers, but our gifted students are born needing to engage in this way.  BYOT has connected me with my students in a way that I never thought possible.  It really is the perfect fit.

5 Ways to Learn with a Nintendo DSi

Posted by BYOT Network in BYOT Strategies on February 15, 2012

Although I continue to see additional iOS devices, iPods and iPads, in the hands of students in the elementary grades, one of the most popular technology devices continues to be the Nintendo DS and DSi.  In fact, all Nintendo DS models combined have made it the best selling handheld game console.

These handhelds are often a child’s first foray into personal technology, and they can be utilized effectively as learning tools within the BYOT classroom.  To learn more about these devices, I asked the experts – a group of fourth grade students!

1. Pictochat – With Pictochat, students can communicate with 15 other users over a distance of about 65 feet by sending each other pictures or words over a wireless connection.  Students can ask each other questions about concepts they are studying, such as math problems and possible solutions, and practice writing complete sentences and spelling words.  This communication could be the beginning of understanding appropriate netiquette within the safety of the classroom learning community.

2. Clock – With the clock tool, students could monitor how long they work on tasks in the classroom and set an alarm when they need to move on to the next activity.  This practice could help them develop more self-regulation as they monitor their classwork.

3. FlipNote Studio – FlipNote Studio is used to design animations.  Some classroom activities could be to animate simple machines, steps in a process, or mathematical problem-solving.  Students can add sounds to their animations including recording their voices.  Another feature of FlipNote Studio is called Light Box, an onion skin effect that is included with the animations so students can perfect their illustrations.  There is also a Copy tool so that students don’t have to keep drawing the same picture.  Students’ animations can then be saved as animated gifs onto an SD card or shared wirelessly with other students’ DSis.

4. DSi Camera – All DSis have a camera tool, which has several uses within the classroom.  The photos that students take can be saved to the device’s internal memory or to an SD card.  One fourth grade student took weekly photographs with her DSi of caterpillars that she had at home to document their metamorphosis into butterflies.  She uploaded these photos from the SD card into a class blog and wrote a description of each stage to share with the class. Since the DSi’s are able to connect to each other, students are able to share their photos with each other without the use of email.

Other types of effects can be added to faces in students’ photos.  This can be used for inspiring characters for creative writing.  Students can also add frames to their photos with an area for adding text.  These photos could be saved to an SD card and loaded onto a computer for class projects.

A final note…The ultimate goal in the BYOT classroom is to transform learning experiences for students.  Students are empowered when they use their personal technology devices in new ways to support their learning.  As you encourage the use of Nintendo DSis in your classroom to promote collaboration and a sense of community, remember that many parents have not seen their children using their devices in the ways listed above.  Be willing to learn alongside your students to discover potential uses for the DSis in instruction.  After all, they are the experts!